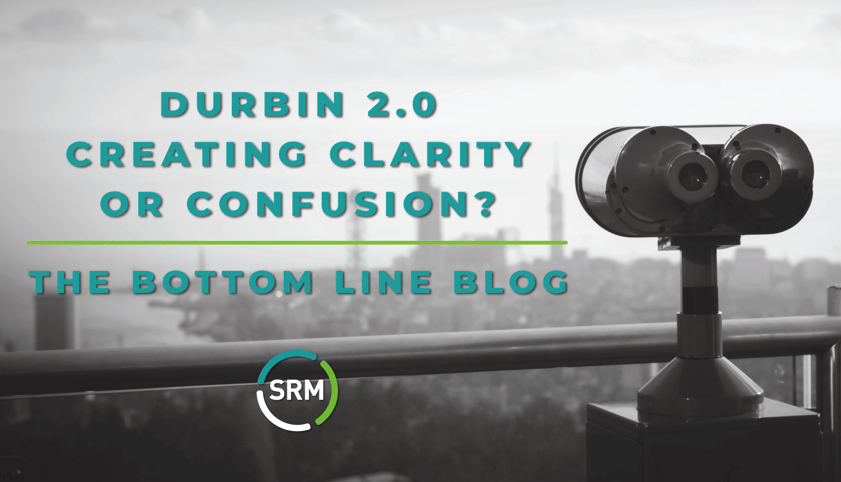 Rumor is that a further tightening of the Durbin Amendment is on the near-term horizon for card issuers. The most concrete evidence is the Fed’s May request-for-comment on regulations for debit routing of online transactions.

The Fed wants to clarify the regulatory requirement that at least two unaffiliated payment card networks must be enabled for all debit card transactions, including card-not-present (CNP), and card-issuing banks and credit unions will be held responsible. Some terminology will also see standardization.

While the Fed positioned its query as a “non-substantive clarification,” many of the 453 comments submitted so far express a belief that the proposal, if enacted, would have a significant impact on issuers. Meanwhile, bankers are entering a period of uncertainty as they closely monitor the situation for implications to P&L.

About Regulation II | Cliffs and Windfalls

To fully appreciate this situation, a brief history lesson is in order. The Durbin Amendment gave rise to the Fed’s Regulation II, which set standards to ensure that interchange (fees paid by merchants to payments vendors for processing a payment) were “reasonable and proportional” to debit issuers’ costs.

This created an immediate and dramatic reduction in debit interchange rates for banks and credit unions with over $10 billion in assets – particularly for dual-message (signature) transactions, which today stand at barely a third of 2011 levels. In percentage terms, interchange rates remain lower for every major debit category compared to a decade ago. Financial institutions (FIs) crossing the $10 billion asset threshold can also expect to encounter a revenue “cliff.”

The result has been a windfall for merchants – at the expense of card-issuing financial institutions. With margins severely curtailed, issuers cut card rewards programs and the estimated number of unbanked Americans increased by about 1 million.

Battle Lines are Drawn – and Solidifying

In theory, the current conversation is limited to Durbin’s requirement that issuers make at least two network options available for all debit transactions. However, this is not always the case for the fast-growing CNP category.

In reality, industry advocates have used the Fed’s comment window to revisit broader grievances in the longstanding interchange wars. Both individually and through retailer associations, merchants took issue with the low share of single-message debit transactions (the less costly PIN variety) in CNP settings.

Based on a recent payments study from the Fed, 95% of CNP transactions are dual-message. In comparison, card-present transactions are 50/50 dual and single-message. Merchants state that, while technology has caught up and can allow two networks to be enabled, issuers have not complied. They’re also pushing for reductions in the regulated interchange rate, arguing that issuer costs have declined by almost 50% since the ceiling was set in 2011.

The Fed proposal would also require issuers to ensure their debit program has access to two unaffiliated networks, “for every geographic area, specific merchant, particular type of merchant, and particular type of transaction for which the issuer’s debit card can be used to process an electronic debit transaction,” raising questions on practicality.

How could an issuer ensure that every merchant carries both of their payment card networks? What if a merchant is deemed high risk? What if one card payment network provides an innovative way to pay that the other network has not enabled? How would such a mandate be monitored and enforced?

Whatever the outcome, it’s clear that more uncertainty will hang over the interchange space for the foreseeable future.

Despite the Fed’s stated desire for a basic clarification of Durbin’s requirements, the wheels are in motion for regulatory change. For now, issuers should be aware of the potential impact on their 2022 budgets, existing contracts’ terms, volume commitments, as well as compliance implications.

Issuers should also actively engage their government relations teams and prioritize this issue locally and nationally while working with their associations.

Read our post, The Latest Evolution in the Battle to Regulate Payments, for more on upcoming regulatory changes.

To watch SRM's recorded webinar on this topic, click here.