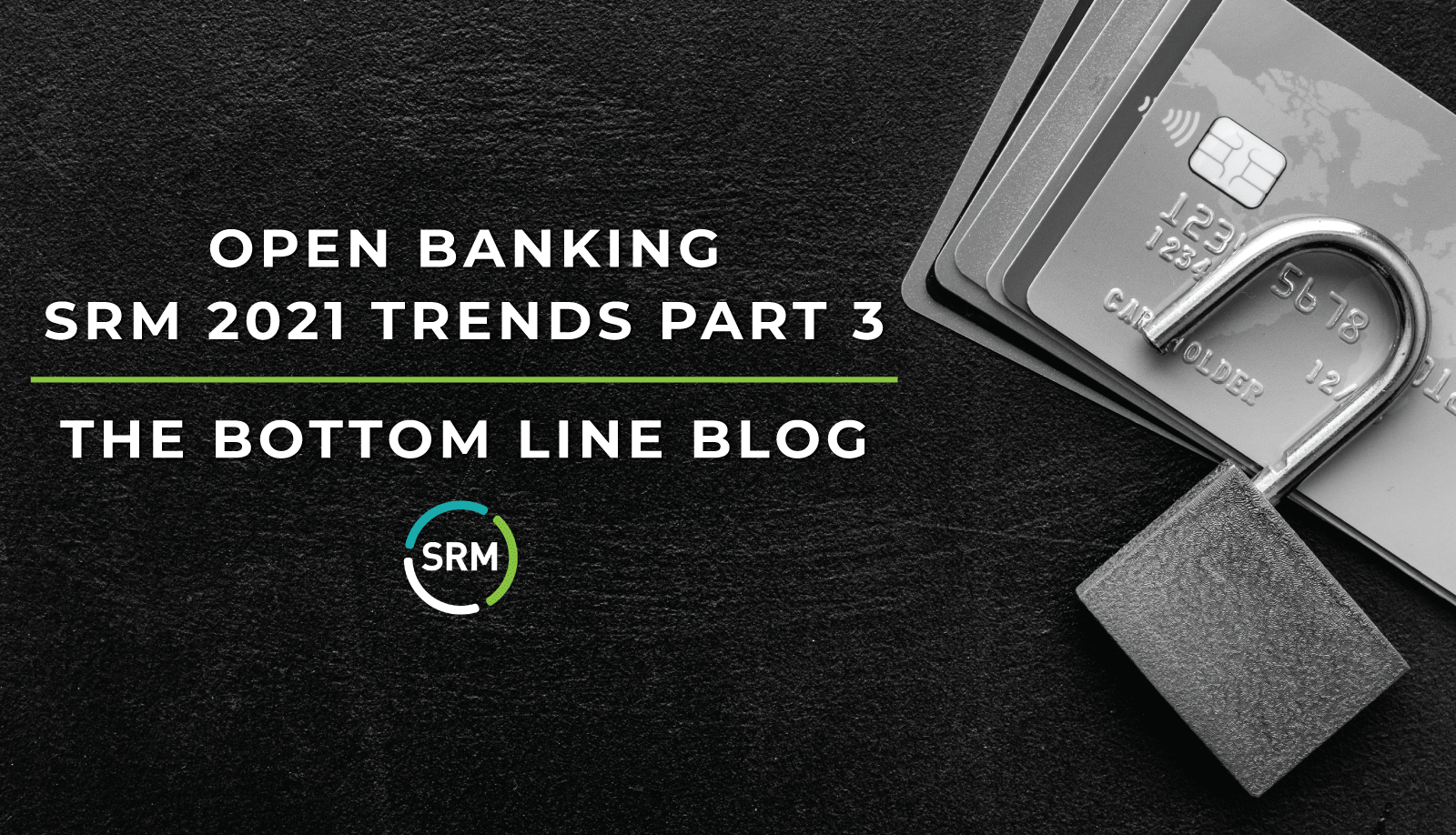 In two previous blogs, SRM detailed the top trends we see driving 2021’s financial services landscape. In this final Trends post, we turn our attention to an emerging one we have observed on both sides of the Atlantic, Open Banking.

What is it and what are the benefits…And what does this mean for the US?

Open Banking is the UK precursor of the Second Payment Services Directive (PSD2) which requires banks to open their data to third-party developers using secure, open application programming interfaces (APIs). It is a progressive solution which encourages new features and services to benefit banking consumers. Thus far, this has typically been limited to the aggregation of different provider accounts in one place; however, more advanced ideas are coming to the fore. An example of such is direct-to-bank payments which should result in both a faster and less expensive transactions since the intermediaries are removed.

Now let’s consider open banking’s potential impact on customer experience and competition in the US. And, while US legislative underpinnings are still in the works, recent developments in APIs and data sharing make it clear they are headed toward a similar endgame.

When laying the groundwork for Open Banking, the UK addressed a very different financial services ecosystem than exists in the US. Most European countries have a consolidated banking system, with only a fraction of the 10,000 banks and credit unions operating in the US under its distributed model. Additionally, a significant concentration of checking accounts are with the Top 4 UK Banks, which is why policymakers sought to artificially drive a competitive agenda in the banking industry through regulation.

By contrast, US open banking opportunities focus on an increasingly robust cohort of non-bank fintech companies developing solutions that blur the lines of traditional “banking.” Although some of these players are pursuing special purpose charters, many are happy to exist just outside the regulatory framework that may hamper innovation, partnering with financial institutions, as needed, to complete the circuit.

Open APIs, such as those made available by companies like Plaid, are central to the data sharing that fuels these fintech/bank relationships. The value of this role was made clear by Visa’s attempted $5 billion acquisition of Plaid – and the Department of Justice’s successful challenge of the deal on anti-competitive grounds. European regulation stipulates what data is shared (and how) with third-party providers. Although US law has yet to offer such clarity, many banks and fintechs have entered data sharing agreements to fill the gap.

Regardless of the model, banks have expressed discomfort with the potential misuse of the data their customers have charged them to store for safekeeping. As we’ve seen in the UK and other countries with emerging open banking services, when agreeing to the terms and conditions of a parade of seemingly harmless third-party apps, many consumers remain blissfully unaware about the extent of data rights they’ve signed away – and that they’ve tied their financial institution’s hands in shielding the data. The Consumer Financial Protection Bureau is currently sorting through public comments in its efforts to ensure a safe playing field.

A Different Kind of Paycheck Protection

The recent launch of Plaid’s Direct Deposit Switch is the latest example of an open banking API making waves in the US. With minimal coding, this interface promises to enable financial institutions to seamlessly attach account holders’ paychecks to direct deposit without the current paper-based process involving voided checks and time lags. Plaid is touting this capability as particularly useful for gig economy workers with multiple sources of income.

Established banks and credit unions may view this as a mixed blessing, as direct deposit is a coveted service which can assure primary account status. Plaid’s API for direct deposit – while still in beta testing – will make it easier to switch direct deposits to another bank (perhaps one of the new digital-only alternatives), rendering that preferred status less “sticky.”

It will require mass adoption by major employers and payroll providers but it’s exactly the type of innovation and disruption envisioned for open banking.

Whether it’s in the US or abroad, open banking is poised to have enormous implications for customer experience and competition. The open banking initiatives are central to effective and secure data sharing. This technology is key to fueling the fintech/bank relationships that offer customers the services that best meet their needs, creating a more profitable and competitive financial environment – but there’s so much potential that it is not, and won’t be, limited to just financial services and fintechs.

Read Part 1 and Part 2 for more of SRM’s 2021 trends analysis for banking and credit union leaders.

To learn more about this topic from the author, read Open Banking: Two Continents, Two Agendas.