Durbin 2.0 Part II: Who Weighed In and What They Said 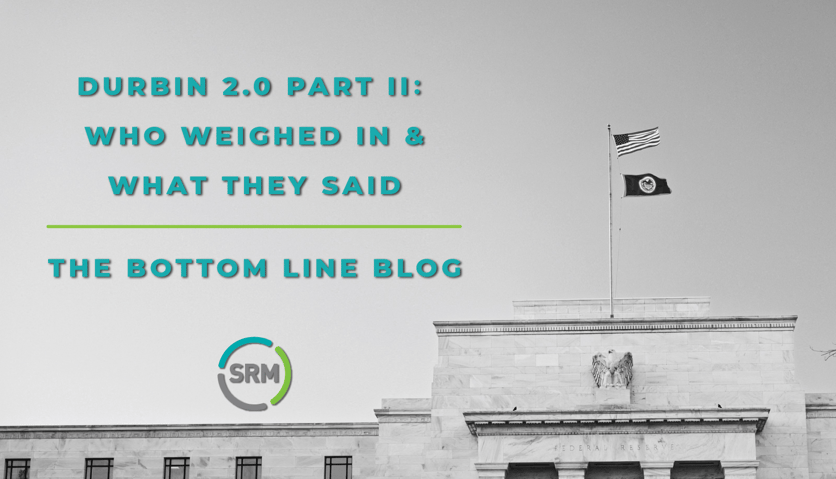 As discussed in a previous blog, the Federal Reserve began seeking comments on proposed changes to Reg II of the Durbin Amendment in May. At that time, the Fed said that it felt the changes would be non-substantial and would not include more compliance obligations. Currently, the Fed bars issuers from restricting the number of unaffiliated networks for debit card transactions to fewer than two, including one signature network and one PIN network. The new proposal would make issuers responsible for ensuring that all transactions with US merchants can be routed across two unaffiliated networks.

While the Fed characterized this change as a simple clarification, it is anything but, as evidenced by the over 2,600 comments received. It is clear this issue is complex, substantial, and would increase compliance obligations.

We have sorted through the comments posted on the Fed's website and various government sites to summarize the key points for both sides of this argument.

This continues to be a top priority for issuers and merchants. We noted that the Federal Trade Commission and Justice Department weighed in on behalf of merchants and in support of the Fed's recommendations. While the Fed has not said when it plans to act, the general consensus is that the industry will hear something by mid-2022.

Reg II's clarification outcome could have significant impacts for financial institutions with some very troubling elements. SRM is hopeful that, with all the comments and the stated intent of not increasing issuers' compliance obligations, the outcome could be less problematic with more clarifications.

Many believe, at a minimum, the Fed is likely to bar issuers from opting out of PINless or CNP transactions with their unaffiliated networks. That said, issuers should actively engage their government relations areas and prioritize this issue at the local and national levels while working with their associations. They should monitor this closely and highlight this item during strategic planning. They should take inventory of existing relationships and evaluate this potential change's technological, operational, and financial implications.

Read part one of this blog, Durbin 2.0 | Creating Clarity or Confusion? or watch the recorded webinar for more on this topic from the team at SRM.

To discuss how this directly affects your financial institution, contact Keith Ash at Kash@srmcorp.com.