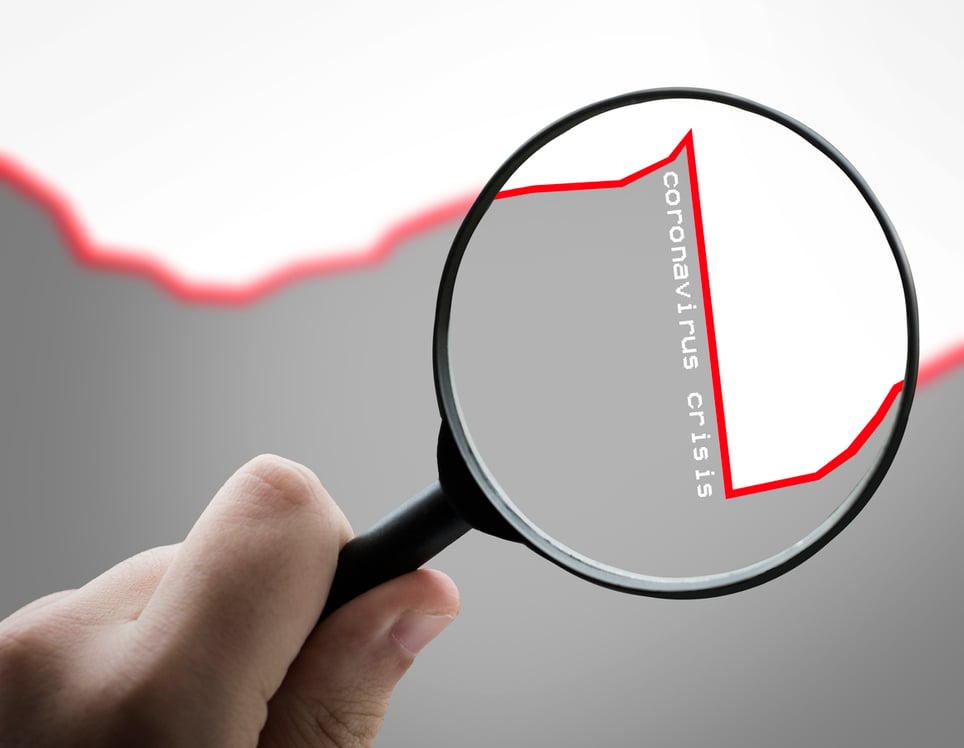 Delinquencies & Defaults Brewing on the Horizon

Despite the many uncertainties in our “now” normal, Covid-19 is undeniably changing consumer spending patterns – and it shows. According to its 8-K filing from June 1, which compares May 2019 to May 2020 payment volumes, Visa’s cardholder spend in categories like travel, entertainment, fuel and restaurants had 20-40%+ declines year-over-year, while spend in categories such as groceries, home improvement, retail sales and telecom/utilities grew 20-40% for the same period.

“U.S. payment volume growth was still in negative territory in May thanks to the Covid-19 pandemic, but the picture was brighter than it was in April,” Visa Inc. reported. Meanwhile, markets continue to see overall purchasing activity shift from physical stores to e-commerce. Notably, as during the last economic recession, SRM’s data confirms that consumers are again increasingly favoring their financial institution’s debit card over credit cards in times of financial hardship.

However, the full scope of the economic downturn remains to be realized. April data shows delinquency rates have already edged upward slightly in card portfolios and may be understated (for reasons explained below) while top line revenues take a clearer immediate hit.  According to Fitch Ratings, the stimulus and forbearance programs are both obscuring the picture. Particularly troubling, perhaps, is that both sides of the P&L equation are being adversely impacted – simultaneously.

This blog takes a closer look at what we know so far, and what issuers can do to shore up resources to tackle these brewing conditions for defaults and delinquencies.

Not the Usual Holiday

According to public data tracked by S&P Global, nearly every major card issuer reported a higher April delinquency rate than for either March or the prior April. The increases are nominal and the absolute levels are not cause for concern…yet. However, these delinquency figures do not reflect forbearance programs extended to customers suffering a sudden economic shock, such as a layoff.

On the plus side, banks and credit unions have earned significant goodwill with consumer-friendly gestures, reversing their “bad guy” image of the 2008 financial crisis. April’s moderate employment rebound implies it was the right move, helping some individuals avoid digging too deep a hole before returning to work. Nonetheless, unemployment remains at three times pre-Covid levels, and many of these balances currently in forbearance are at risk of entering the delinquent category in the coming months.

It comes as no surprise that American Express posted the largest delinquency increase, given that small businesses were especially hard-hit by Covid-19 shutdowns. Amex’s portfolio tends to be more heavily SMB-weighted and is also disproportionately impacted in the travel and entertainment categories.

Gross card portfolio yields are down across the board, which can be attributed to issuers waiving more fees and suspending the accrual of interest for accounts in forbearance, along with adverse interchange impacts resulting from the decline in spend. Many issuers have likely also delayed routine practices like credit line increases and marketing programs that normally drive spend and balance growth. However, the news is not all bad. After a significant plummet in April, gross yields seemed to rebound in May. Yields are still below where they were in May 2019, but the brief upward trend is promising.

Glimmers of hope show in the preliminary May numbers, which indicate some spending recovery as cities reopen for business. However, in times of economic hardship, many individuals who carry multiple card products are likely to default on the cards least important to their financial health. The first cards to go will be those with the lowest value propositions or not tied to their primary bank where they may have a DDA, home and/or car loan, etc. If harsh economic conditions persist, we expect all card-issuing institutions will face these challenges, and they have a narrowing window of time to get their houses in order – that is, to revisit and refine their credit processes.

To brace your card portfolios against these economic impacts, reinforce your best relationships, manage exposure in your existing portfolio, and set the foundation for the eventual upswing. Given the numerous forecasts of an extended period of high unemployment, issuers who decline to seize on this opportunity will quickly pay the price.

The Bottom Line: Metrics like credit losses, delinquencies and yields are performance indicators of not just economic conditions, but also underwriting and collection strategies. Just as consumers are reorganizing their home economics, so too should banks and credit unions reassess their own business processes and revenue streams.

It is important to note that we’re making broad assumptions based on limited and, at times, anecdotal evidence. The longer-term impacts of Covid-19 on credit card portfolios remain unclear. However, even if there is a rapid “V-shaped” recovery as some have (very optimistically) predicted, the events of the last three months should serve as a wake-up call for issuers to equip their card portfolios for sudden shocks.

For more data and first-hand accounts from SRM’s perspective, check out last week’s post covering our latest Invoice Tracking Data Trend analysis. Even more educational resources can be found in our Road to Recovery (R2R) section of the SRM Academy.