Three Months Older and a Bit Wiser on COVID-19 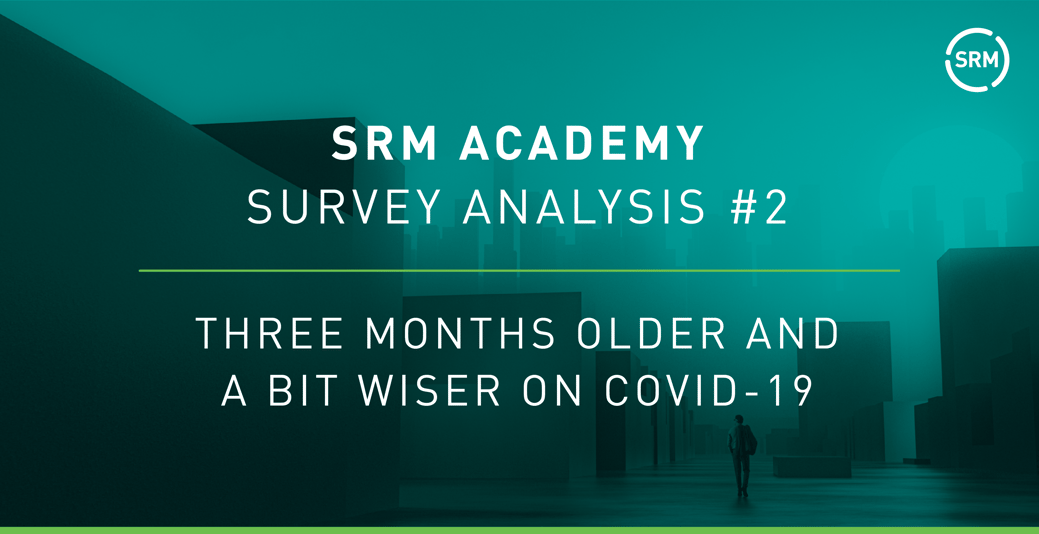 In mid-March, when Americans were beginning to absorb the notion of shelter-in-place orders, SRM reached out to our financial institution clients to get a snapshot of their mindset regarding approaches to meeting consumer needs in the age of the pandemic. The findings of that initial survey can be found here.

To refresh this view and learn how time in the “now normal” was impacting banks and credit unions, a second survey was planned in late June. Of course, by the time the second survey was ready to go into the field, COVID-19 was re-asserting itself across the United States. We retooled the study to accommodate the circumstances, revisiting some of the questions from the March survey and drilling down into digital transformation and payments.

Response to the second survey was higher than what was seen with the first. The answers to the study make it clear that bankers' attitudes and expectations are still evolving. Given the ongoing uncertainties playing out, this is not a surprise and, in fact, represents a positive as fewer respondents seem to be locked into the "but this is the way we have always done it" mindset. With the entire country in various stages of response to the pandemic and with many rolling back reopening plans, agility and flexibility will be the characteristics of leadership predisposed to not just survive, but possibly thrive in the months and years ahead.

The Future is Digital (Duh)

Given the temporary shuttering of many branch locations, it's hardly surprising that nearly four-fifths of financial institutions reported meaningful growth in their digital user base. The most common response was a 10-15% uptick from pre-pandemic levels; however, 10.81% reported growth of 26% or more.

With such consumer momentum, it is also natural that banks and credit unions see “Expand/Improve Digital Channels” as their most critical initiative going forward. Nearly two-thirds of respondents rated it their top priority among a list of five options offered. Even if a portion of the new digital users revert to old habits once we return to something resembling “normal,” the digital channel has gotten a permanent forward jolt.

Finishing a clear but distant second was “Use Automation to Replace Manual Processes.” This likely indicates that financial institutions are still in the due diligence stage when it comes to how best to meet this challenge. Since automation is part of the digital transformation process, it may be incorporated into that effort being seen as a tool to achieve the larger goal.

Interestingly, last among these proposed initiatives is “Decrease Branch Footprint.” Despite the challenges posed by social distancing or outright quarantines, bankers are apparently not yet prepared to throw in the towel on face-to-face service. The process of due diligence in this area also may be impacting this finding. It is not as simple as locking the doors of the branches. Understand where and when to close, along with discerning what form existing physical service locations should take, is a complex puzzle. As with automation, decisions about branch closures intersects with the scope and timing of digital transformation.

To quote a CFO/CRO contact of mine, “If you are not investing an increasing amount of your money into technology – especially technology related to digital – then your clear message to the market is, “We are waiting to be bought.” Of course, even then, the lack of investment in improving digital channels ultimately erodes the valuation an institution would see from a potential suitor.”

Regarding payments, a majority of respondents report increases in Card Not Present transactions and mobile payment utilization, while nearly half have seen declines in cash withdrawals. Most also note increased debit card activity, with a corresponding decline in credit card flows. This aligns with Federal Reserve reporting, which shows outstanding U.S. credit card balances falling below $1 trillion for the first time since 2017.

Consumers actively paying down debt may prove to be a short-term phenomenon, but it’s yet another example of how our current situation differs from other economic contractions we have seen or read about. It is essential banks and credit unions have a detailed understanding of the numbers associated with these areas if they are negotiating contracts with payment vendors.

Preparing for the Long Haul

One area where a consensus seems to be forming is in the expected duration of the pandemic’s economic aftermath. In our March survey, opinions on this point were widely and evenly spread from “less than six months” through “18-24 months.” By late June, nearly half of responses slotted in the 18-24 month range, with most of the remainder expecting a 12-18 month recovery. (The 24% of March respondents who expected a return to normal in six months or less are nowhere to be found.) Ominously, bankers see a longer road ahead for the communities they serve as compared to their institution’s financial health.

The Bottom Line: Needless to say, there are several more scenes to be played out in this film noir. The high percentage of institutions keenly attuned to the importance of digital to their future success is an important positive seen in this second survey. The key will be the depth of understand about digital transformation. Prior to the pandemic, many leaders in community institutions seemed to have an allergic reaction to this terminology. Now it must become their main initiative if they are not content with waiting for another institution to acquire them. It will take considerable courage to make cuts elsewhere required to have the funds necessary to achieve the level of digital transformation necessary to set the foundation for the future.

For deeper analysis on this survey as well as ongoing commentary about the pandemic’s impacts, check out the Road to Recovery section of The SRM Academy.