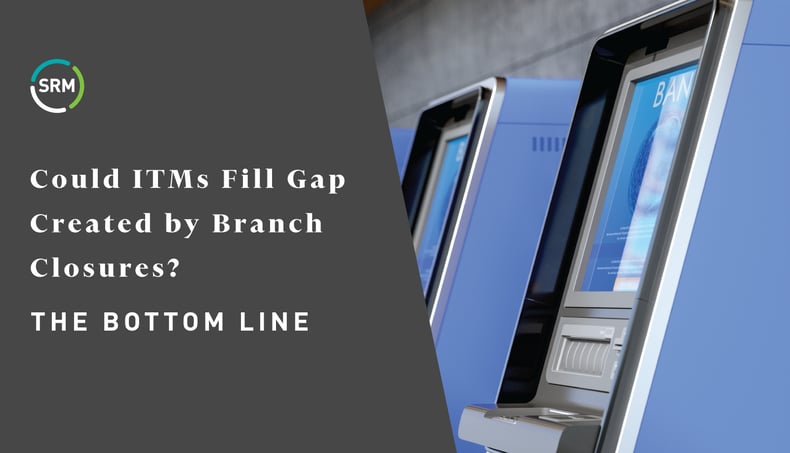 At the same time, branch traffic is declining, limiting opportunities for locations to generate revenue. If ROI is a primary consideration, it’s getting harder for banks and credit unions to justify having large branch networks.

ATMs were initially seen as the secret weapon to relieve branch congestion by offloading basic transactions like cash withdrawals and balance enquiries. Since then, cash usage has declined markedly, making up only 11% of point-of-sale transactions in North America and 25% in Europe in 2021, according to FIS’s Global Payments Report. The pandemic has further accelerated that trend, and customers have migrated many other routine tasks to online and mobile channels.

Consequently, the number of ATMs with meaningful upfront and ongoing servicing costs has also declined.

Nonetheless, significant use cases remain, including meeting the needs of specific customer segments and complex, high-value transactions, where banks, building societies, and credit unions have yet to identify a delivery channel that matches the branch. We believe interactive teller machines (ITMs) deserve consideration as an option to close the gap created by thinning branch networks.

Video tellers started having an impact in the early 2010s, with an initial focus on rural areas, though they were eventually overshadowed by mobile banking. In addition to ATM functionality, ITMs can put the customer in touch with a representative, if needed, via two-way video or audio-only. According to the American Bankers Association, the typical ITM can cost $55,000 to $80,000, excluding a one-time infrastructure cost ranging from $250,000 to $500,000. Yet, they have the potential to really connect with communities and cover their initial cost outlay many times over – if used and marketed to the fullest with an effective customer journey design.

The Need for Branches is Diminishing, Not Vanishing

In the US and UK, the trend in branch counts is clear as reports of closures surface regularly. Even the most bullish statements suggest that the US rate of decline has merely slowed. In the UK, Lloyd’s Bank announced in late July that it would shutter 66 locations; in October, NatWest indicated the closure of over 40 locations – further depleting the high street branch availability.

Institutions in both countries face reputation risk, as media reports often centre on the “banking deserts” that can emerge in low-income areas. Closures can also trigger regulatory challenges. Consideration is being given to new legislation in the UK that aims to “ensure access to cash” via “adequate” withdrawal and deposit facilities.

In the US, several cities have enacted or increased enforcement of existing laws requiring merchants to accept cash as a form of tender in the name of financial inclusion. This may seem overkill, but there may always be a desire for physical cash and in-person, physical, bank representation on our main and high streets.

Conversely, consumers don’t use branches as they did in the past. Even significant sales opportunities like mortgages and small business loan originations have increasingly moved to digital portals and intermediaries. With this change in consumer behaviour, banks are missing out on what was once the prime opportunity to sell ancillary products to customers that would add to their bottom line and, by association, ensure that branches were viable on their own. However, the cost dynamics have not been made clear to consumers, nor – arguably – considered by the media and political advocates of the branch presence.

Yet, the alternative to the expensive branch channels, to provide advice and cash and cheque banking services, could be the ITM. With secure “booth” facilities available, much of the personal interactions and transactional banking can be catered for while allowing for effective connectivity and biometrics (for identification and verification) to help retain a physical bank presence in the modern era.

The Last Branch in Town?

Many financial institutions are exploring options for maintaining a baseline level of service throughout their geographic footprint. One question is the acceptable distance a customer should be expected to travel to reach a physical branch. Some UK banks have joined forces in a few remote locales, alternating days staffing a single site.

While traditional ATMs are designed for standard transactions, with limited opportunity for deeper engagement, ITMs offer a significant step forward. In the US, ITMs have gained some traction through fuller-functioned, video-enabled machines (which remain largely absent in the UK, where a few large banks house rudimentary versions within their branches). Republic Bank in Kentucky, First International Bank & Trust in Arizona, and MVB Financial in West Virginia are among the banks that use ITMs.

When judiciously deployed, ITMs enable several potential benefits. Secure, modular booths create new possibilities for co-location within other high-traffic retail outlets. A pool of frontline agents can be remotely housed, boosting efficiency while supporting customers across a wide radius of low-volume areas. Live video access to human representatives should satisfy a subset of the segment that prefers personal interaction, preserving sales opportunities. And ITMs could form part of the classic hub-and-spoke model that lets a major city centre branch oversee activity at local/regional machines to maintain a local appeal.

As financial institutions continue to rationalise their branch footprints, given declining demand and unappealing ROIs, investing a portion of the resulting savings into ITMs may offer a compelling path forward, providing wider options to retain market visibility and selling opportunities.

SRM will continue to monitor this evolving technology space. We can also help you evaluate the market and determine if ITMs are the right fit for your financial institution.