Can You Spare Some Change? | A Broader Perspective of the US Coin Shortage 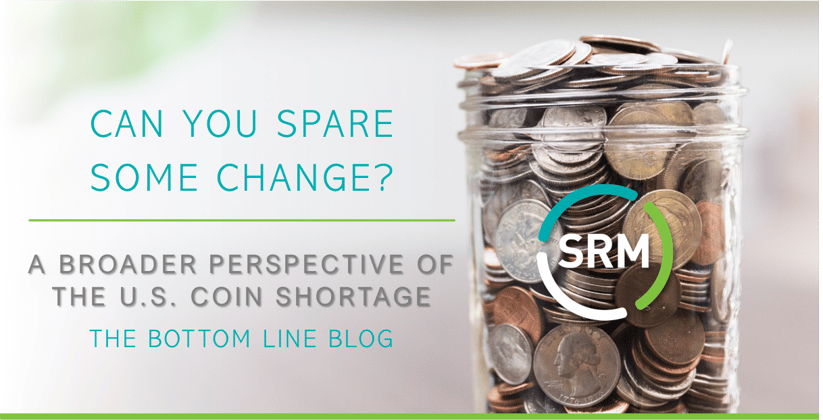 By now, Americans across the country have seen makeshift signs at cash registers requiring exact change or “offering” to change coins for bills, free of charge.

A few Chick-Fil-A locations have even begun offering a free sandwich to customers who bring in $10 of coins, to replenish their cash drawers. There have also been reports of some institutions offering an extra $5 for every $100 of rolled coins.

The “national coin shortage” has become so severe, the Fed has convened a task force to identify solutions and limit the economic impact.

Like all supply/demand imbalances, this one will eventually work itself out. The situation, nonetheless, provides a valuable case study in consumer behavior and how banks and credit unions can best serve customers until their habits revert to prior patterns - unless they don’t.

“Contactless” as an Ideal

Only a few short months ago, “contactless” was a geeky payments term referring to the tap-and-go capability built into an increasing number of debit and credit cards, even when cardholders didn’t realize they had it. Fast forward a bit and contactless has become a benefit touted in ads ranging from Domino’s Pizza to new car buying. The definition has morphed somewhat, however, to imply minimizing potential COVID exposure during shopping experiences (this concern includes card terminals, now often extended through drive-through windows by a gloved hand).

Since the pandemic-driven adoption of contactless payments is circumventing the use of cash, coin circulation has slowed to a near standstill. In the pandemic’s early days, merchants discouraged or refused cash…even small ones who are usually eager to avoid card fees. From mid-March through May, the Fed reported 63% of consumers surveyed made ZERO in-person payments (the category where cash still plays a major role).

Jars and Vaults and Hoards of Coins, Oh My!

Meanwhile, at the US Mint, implemented social distancing rules for worker protection resulted in a decline of coin production. In theory, these two factors would offset each other, but real life rarely plays out as neatly as theory. Americans became less inclined to recirculate the coins they had, collecting them instead in glass jars as their rainy-day fund - after all, why carry coins if you’re unlikely to use them?

This created a hardship for merchants, particularly once stay-at-home orders began lifting and business re-openings required many to re-stock cash drawers simultaneously. They began building stockpiles rather than returning excess coins to their banks. Banks followed suit, the Fed’s inflow of surplus coins diminished, and soon enough an obscure, smoothly operating system broke down, leading to our current nation-wide coin shortage.

On April 4, the FED added this question to their FAQs: “How should a bank evaluate limits on large-scale withdrawals of cash when a bank does not have adequate cash levels on hand?” The question reveals another paradox - although they wound up using less cash, Americans actually withdrew more in the weeks leading up to the pandemic…presumably for the sake of perceived financial security in a crisis (this pattern of banking behavior also happens ahead of major storms and other potential disruptions).

Then there’s the public perception of cleanliness…studies indicate cash is less likely to transmit the virus than a credit card terminal or ATM PIN pad, but the perception of cash as unclean (with coins, presumably, worse) has already taken hold.

The Bottom Line: Supply/demand issues around coins will work themselves out as COVID’s fluctuations pass. The Fed will resume normal production and consumers will eventually cash in their stockpiles. Ideally, public awareness campaigns like the US Mint’s are helping on the latter front. However, the bigger question remains – will consumers’ newfound digital habits hold or will consumers gradually drift back to cash usage, after the pandemic dust settles?

The longer factors like coin shortages compound COVID’s inconvenience, the more likely digital gains will hold. SRM’s most recent payments report explores the nuances of card network agreements, given changes in usage over the past decade. Meanwhile, as we all continue adapting to the one constant in this pandemic – change – you can add COVID-19’s effects on spare change to the list of factors to consider.