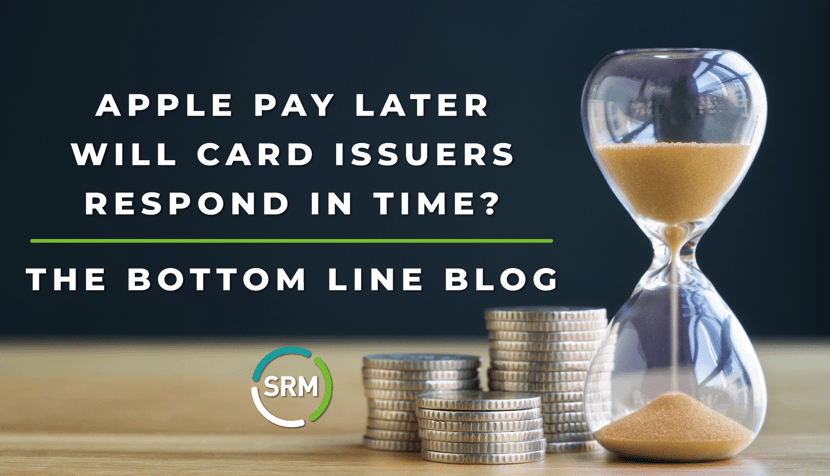 If there were any lingering doubts about the potential impact of the buy now, pay later (BNPL) installment credit model on card economics, Square’s recently announced $29 billion acquisition of Afterpay likely put them to rest. Nonetheless, we see Apple’s plan to enter the fray with a feature built into Apple Pay as the more significant near-term concern.

Though much is still unknown, the unofficially dubbed “Apple Pay Later” could potentially be more threatening to card issuers than existing BNPL products. It could also further complicate the Apple - bank/credit union/debit issuers relationship, which could already be described as “frenemies” at best.

A Decades-Old Product in a Modern-Day Wrapper

At its core, BNPL is essentially a digital update to the age-old layaway plan. The main difference is that, now, the buyer receives the goods before completing all payments. Even American Express offered a similar card-based service with Sign and Travel in the 1980s.

BNPL segments the purchase price into a series of pre-determined installments – when paid, the debt is resolved. An interest charge or servicing fee is often tacked onto these payments – which, in APR terms, are typically lower than credit card interest rates. The merchant may subsidize or even fully fund the finance charges in hopes of reducing “cart abandonment” for relatively high-ticket items.

A standard model is the “Pay in 4” feature popularized by PayPal, which Apple reportedly plans to emulate. Under this scheme, the buyer repays the purchased amount over four equal bi-weekly installments with no fees or interest added. When one considers standard credit card billing cycles and grace periods, the balance barely remains outstanding longer than a “normal” card purchase paid in full upon receipt. Yet many consumers perceive this as a value add over traditional card payments.

Larger purchases such as fitness equipment, washers and dryers, and medical procedures usually involve 12 months or longer repayment schedules. Given the wealth of consumer data now readily available, it’s become safer for underwriters to extend such relatively short-term debt – especially when autopay is the default for installments.

Trimming a Little off the Top

Apple Pay launched in 2014 touting the premise that it would solidify participating cards’ top-of-wallet status, with issuers agreeing to pay a fee to Apple for that privilege. It’s therefore ironic that Apple Pay’s first significant feature enhancement could potentially re-route a portion of that volume from card “partners.” Meanwhile, Apple is reportedly on pace to handle 10% of global card transactions by 2025.

Technically, “Apple Pay Later” will be unrelated to the Apple Card, a financial services partnership with Goldman Sachs. However, Goldman will also serve as their lender for the BNPL loans under a separate agreement. It’s easy to envision activity within Apple Pay once destined for a bank or credit union’s card being siphoned off to a BNPL solution and, potentially, an Apple Card cross-sell offer.

Currently, 70% of Apple Card customers are in their 20s and 30s - the primary BNPL audience. It’s logical to think this cohort will eventually gravitate toward more traditional credit products; financial institutions cannot afford to miss the boat on establishing these relationships now.

Already highly popular in many other markets, the ever-expanding stable of BNPL solutions (including players like Affirm, Klarna, and the soon-to-be-Square-owned-Afterpay) poses a growing threat to the traditional suite of debit and credit payment offerings at the US point of sale. “Apple Pay Later” has the potential to fuel even greater disruption since, unlike other offerings, it’s poised to relocate a line of credit to another financial institution.

With Visa and Mastercard investing in similar functionality, card issuers should weigh their options now to meet customer demand and safeguard the future of their credit card programs.

Co-author Myron Schwarcz, EVP at SRM, has two decades of experience in the banking industry, advising leading financial institutions on their strategic initiatives. Further inquiries of Myron may be made by emailing mschwarcz@srmcorp.com.

Co-author Larry Pruss, SVP at SRM, has nearly 25 years of expertise in payments. Larry has worked with leading financial institutions such to develop strategies and plans related to card optimization, revenue enhancement loyalty marketing, and portfolio acquisition. He is often quoted in industry publications and regularly publishes articles and white papers related to his areas of expertise. Larry can be reached at lpruss@srmcorp.com.